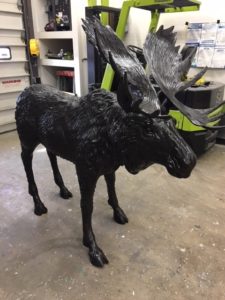 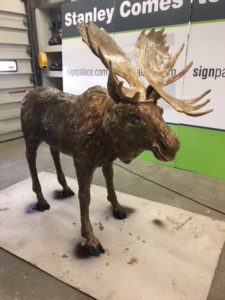 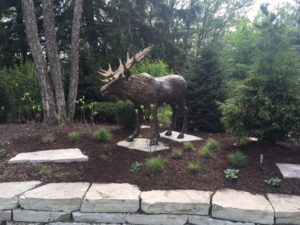 In his natural habitat

When it comes to painting at the Sign Palace, we are passionate no matter what our canvas is. Whether it be a small sign or a giant life-sized moose we go above and beyond. In this special GoPro video you can get an in-depth look at how we transformed a simple brown statue into a realistic looking moose, affectionately named Stanley. At the Sign Palace we take great pride in our quality of work. This is shown in the video through the meticulous detail that our painter puts into our moose Stanley.

At a time ruled by the industry and advanced technologies of all kinds, it’s easy to forget that once many things were done by hand. As recently as the 1980s, it was impossible to walk down any street in America without seeing hand-painted signs of some type. Storefronts, billboards, murals, banners, and even street signs were hand-lettered, relying entirely on the skill of the painter to make them readable and attention-grabbing using nothing more than a toolkit of brushes, some jars of paint and a keen eye. Channeling vision and imagination into design and advertisement, custom paint jobs, and unique works of art. What was historically a common and indispensable trade has been all but wiped out by the advent of computerized sign-making equipment. Sign painting as an occupation and industry took a major hit with the advent of illustration software, giant printers, and vinyl cutting, but it’s making a comeback thanks to our recent cultural reinvestment in the value of manual work.

150 years in the making sign painting is a true American art form. This began when companies started not only identifying what they were selling but started wanting to advertise their product. Instead of going to a general store and getting flour from a random barrel put in a 5 lb. sack, people could identify which flour they wanted all from the signs and advertisements that these sign painters created for the industry. This changed the game. Across America painters were very high demand to create signs for every type of business.  Sign painting was a lucrative, practical trade and extremely common. You’d be surprised by the number of people who can say they’ve been a sign painter at some point in their lives. A man could pick up a brush and a mahlstick and with practice and proper techniques, apprenticing alongside experienced painters, make a good living at being a sign painter. Their artwork had to be aesthetically appealing, sometimes even humorous or patriotic, and simultaneously conveying the identity of their commissioners, communicating the services which were to be sold. Many skills and techniques were taught, such as gold leafing, glue-glass chipping, stenciling, and silk-screening. Sign painting turned out to be a proper artistic process which relied on experience, practice, tricks of the trade and concepts of design in order to achieve its full potential.

Today we can see the chipped and faded remains of many of these signs today, often called “ghost signs”, apparitions from a time before computers and vinyl letters. Because they had to be made on the spot, every sign was produced with a brush attached to a hand. And if the sign was big enough and painted high on a wall, that hand was attached to a “walldog”. For the high-wire act, walldogs scaled buildings to paint signs that sold everything from the local laundry to King Midas Flour to Owl Cigars. It’s not exactly clear where the term originated, but it goes back at least to the turn of the 20th century. And it stuck. The workers were called walldogs for two reasons: first because they worked like dogs (you try painting a 30-foot brick wall in the blazing heat or wind and cold); plus, sliding up and down the side of a building meant they needed to be tethered–leashed, so to speak–to the wall. The signs may have been commonplace, even ordinary, but there was nothing ordinary about a walldog’s skill or their influence on our landscape, even if it was unintentional. Despite being the low men on the sign-painters’ totem pole, they were landscape artists, uncredited but combining the skills of a muralist and a rock climber. They were often poorly paid and living more than a little dangerously. Not only were the designs and execution done by hand while hanging from the side of a building, the paints themselves were “personal” formulas to put their own stamp on their work.

In 1965, Johnson signed the Highway Beautification Act, regulating road signs that were popping up along the growing interstate system. There had been an earlier attempt to control the signs–the 1958 Federal-Aid Highway Act–and although the two pieces of federal legislation were aimed at highways, they paved the way for local regulation of outdoor ads and signs in many communities, restricting where they could be, their size, and sometimes even their colors. The signs and their painters began to fade from view, neglected, painted over or stuccoed through the years, leaving only a ghost of themselves behind, worn by time, weather, and a little apathy.

These days many towns and cities are bringing the old signs back to life by documentation, preservation, and restoration. And in recent years, sign-painting has experienced something of a revival on the fronts and walls of new businesses. There are now sign shops and collectives celebrating the craft, mentoring new artists and reminding us that the touch of the artist’s brush can’t be replaced by vinyl or neon. While the term “walldog” may have been derogatory way back when, it has now been embraced in this resurgence by a new breed of high-flying sign-painters, proud to be Walldogs.